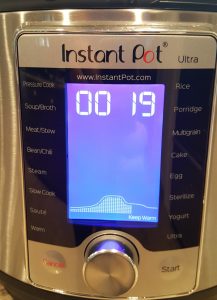 What is Natural Pressure Release or as seen all over the internet as NPR?

Recipes will call for Natural Pressure Release after cooking and what that means is to let the pot cool down naturally and as that happens the pressure will slowly drop.

The US FDA recommends that food holding temps be no lower than 140 degrees.  Your Instant Pot Keep Warm cycle holds food at 145 degrees.  The Instant Pot’s operating pressure creates temps at approximately 235 degrees. At the end of the cooking cycle the heating element stops heating and temperature will begin to drop.  As the temperature drops, the pressure in the Pot drops.  As soon as the Pot drops to 145 degrees the heating element will then maintain a 145 degree holding temp.

How long does this take?  It depends on how much food you have in your Instant Pot.  Roughly 20 mins is the most you will need for NPR.  You might say, but at 20 mins all the pressure has not been released.  At 20 minutes, enough pressure has naturally release so you can now do a Quick Release.  In any case if a recipe calls for 5 mins NPR, 30 mins NPR, 15 min NPR, You can then Quick Release any remaining pressure.

Bonus:  What is a  Controlled Quick Release?  This is when you partially open the vent and control how fast you let your instant pot release pressure.  This comes in hand when cooking pasta for Macaroni and Cheese and other starchy foods that try to boil over and spew out the vent creating the famous white volcano.